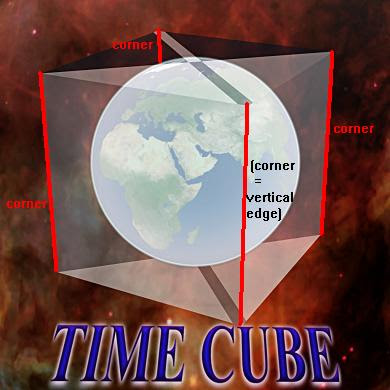 Worshiping a Word God will destroy the USA, for life is composed of cubed opposites. Simple Cube Divinity is the most perfect and life-supporting form existing in the universe and on Earth - including Earth itself. Do you realize that a 4 corner square rotating 1/4 turn creates a full circle? A full rotated square will create 16 corners, 96 hours and 4 simultaneous 24 hour Day circles within only a single imaginary cubed Earth rotation. This amounts to a spiraling quad helix of Earth as it revolves around the Sun - rotating as it revolves around the Sun, to induce the value of the Sun revolving about the Earth. This act demonstrates that both Sun and Earth rotate around each other simultaneously - thus creating Opposites existing only as Opposites with a zero value existence between the binary and cancelling to nothing as One or God theism. All Creation occurs between Opposites, and exists only as Opposites - with a zero value existence. As One or as a Godism, all Opposite values cancel out to nothing. The Circle you see around Earth divides Earth into Opposite values equal to a zero existence. As One or God, both Earth and Human cancel to nothing. The whole of the Universe is composed of Opposites - with a zero value existence - that cancels to nothing as One or a God. Humans worship ONEness of DEATH, thus they are destroying the LIFE of all Opposites by which all Creation exists. I have found Evil lies in the Bible that will rock religious and academic values to their primitive origin. There is no Human or God who can match my Cube Wisdom as a Cube Phenomenologist - The Cube God Measurer. While the Circle of Earth rotation is a perpetual embodiment as it is void of the Corner Time notches that accumulate as aging Life for the 4 corner residents. Have you mentality to know 4 Days rotating simultaneously on Earth?

Ray has wagered $10,000 that his theories cannot be proven wrong. The site has been criticised for the "centered 30-point type" of its design and the "endless blather" of its content.
Posted by Joe Luna at 22:01