The wreckage beneath standing beeches was lit at this place by a glare of sunlight concerted on flat, dying leaves which hung onto life by what was broken off, the small branches joining those larger that met the arms, which in their turn grew from the fallen column of the beech, all now an expiring gold of faded green. A world through which the young man and his girl had been meandering, in dreaming shade through which sticks of sunlight slanted to spill upon the ground, had at this point been struck to a blaze, and where their way had been dim, on a sea bed past grave trunks, was now this dying, brilliant mass which lay exposed, a hidden world of spiders working on its gold, the webs these made a field of wheels and spokes of wet silver. The sudden sunlight on Elizabeth and Sebastian as, arms about one another's waists, they halted to wonder and surmise, was a load, a great cloak to clothe them, like a depth of warm water that turned the man's brown city outfit to a drowned man's clothes, the sun was so heavy, so encompassing betimes.

A knee which, brilliantly polished over or beneath, shone in this sort of pool she had made for herself in the fallen world of birds, burned there like a piece of tusk burnished by shifting sands, or else a wheel revolving at such speed that it had no edges and was white, thus communicating life to ivory, a heart to the still, and the sensation of a crash to this girl who lay quiet, reposed. 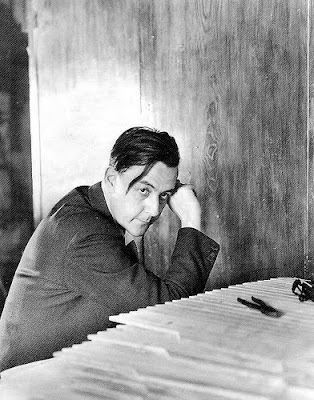 In next to no time that bath was run, with Merode stretched out under electric light and water, like the roots of a gross water lily which had flowered to her floating head and hands. This green transparency was so just right, so matched the temperature of the hidden bliss, that she half closed her eyes in a satisfied contemplation of a chalk white body. She felt it seemed to sway as to light winds, as though she were bathing by floodlight in the night steaming lake, beech shadowed, mystically warmed.

She took a whole azalea right into her mouth.
Posted by Joe Luna at 16:41