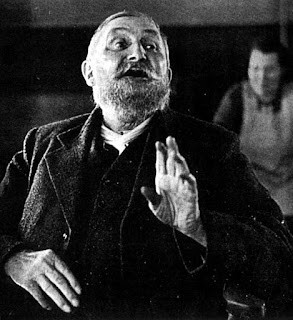 Just left the house for the first time in 3 days and the air is primed and musky with a lurid stickiness that even drowned out the cat alarms, but what the fields must have smelled like down in the village of Llangennith on the Gower peninsula back in 1937 one can only strive to imagine. Ale, probably. Llangenny's Phil Tanner was recorded by the BBC in 1937 and 1949 singing a selection of traditional ballads, bawdy verses and "mouth music", the latter a vocal style imitating the whiddles and trumps of fiddle music and sounding gloriously like a kind of drunken rural glossolalia, interspersed with dance accompaniment instructions ["step"] and the odd joyous yelp. A victim of the grossly unjust late 19th century land laws in Wales that were investigated in 1893 by the Liberal government, Tanner married a 50 year-old widowed landlady at 25 and was a weaver and farm labourer for most of his life. The liner notes to Veteran's 2003 release The Gower Nightingale make a pretty good effort at re-inserting the socio-economic context of Tanner's life and times into the sickeningly halcyon nostalgia of Wynford Vaughan Thomas' caricature of the man as one of the "amiable eccentrics" peddled on his 1976 BBC radio programme of the same name. Thomas, whose commentary on Tanner appears on the CD in two parts, essentially presents the folk singer as a vehicle for his own brand of lamentable faded-youth Hardy-esque countryside quaintness who "wasn't concerned with protest in the slightest degree" (despite the fact that he was one of the very few farm labourers actually to give evidence of the working man's plight in the district to the Royal Commission on Land in Wales & Monmouth as part of the above mentioned investigation, and was consistently refused farm tenancy and thus social advancement by the machinations of the local landowner) and was always "happy and contented" (despite the cruel and ineluctable fates of the characters in the songs he sang). The liners, meanwhile, present a lovingly researched history not only of Tanner and his clan, but of wassailing, bidding weddings and mouth music, and Roy Palmer provides some interesting commentaries on the songs themselves.

I've put up a few of Tanner's more astonishing songs here, including an example of his mouth music, a style that prevails amongst those crazy "travelling folk" of most areas of the British Isles, and quite remarkably beautifully is called "tuning" by the Renals & Legg family of North Cornwall in particular (says Palmer). The Gower Wassail would've been sung as Tanner went wassailing with his own brew, and exchanged verses with those upon whom he'd called for a dance and a drink. Young Roger Esquire seems to be a particularly self-reflexive & satirical song, the last verse apparently deflating the entire episode with a cod-heroic statement from our greedy eponymous hero. Palmer dates the song to early 19th century, which fits. The Gower Reel mouth music is a joy and a hoot - three separate versions are presented on the CD, which can be found here. And is it just me, or perhaps my latent ageism and beardism, but does anyone else spot the uncanny resemblance between Tanner (above), and a certain late, famous British sound poet in full flow? Just a teenchy bit? And isn't the mouth music the icing on the cake of that potentially spurious comparison? How fruitful would it be to think about Cobbing's work less in terms of pure sound, and more in terms of song?

Lastly, I should point to a particularly stunning verse from Tanner's version of the Wassail that, according to Palmer, is found in no others:

Which I suppose is pretty much about as Hölderlinian as you can get 70 years ago in rural South Wales, that measuring of song as breath and spirit, deeply alive (and probably just as deeply drunk), isomorphic with the measuring of oneself against the body of song from which the singer emerges, and into which he disappears.