A short squib read at the ‘Doubting Thomas’ symposium at the University of Sussex, 18th April 2018.

In a 2007 exchange with the critic Sam Ladkin, the poet and theatre maker Chris Goode calls Caravaggio’s The incredulity of St Thomas “the most powerfully salient depiction of exemplary wound response that we have.” Goode continues:


“Noise […] increases uncertainty: therefore, the wound – its appearance, its tangibility – must be a signal that dispels Thomas’s doubt: because it encourages him into a confrontation with the physical body. Caravaggio, as touchingly as any boyband fan, trusts the idea only insofar as he trusts its carnal embodiment. But it’s only the body below the surface that carries such authority; the surface appearance of the body may still be a depthless apparition, a commercial presentation, one of a million roaming pin-ups. So as the wound slowly heals, the body becomes less like itself, more like its image.”

At stake in this enigmatic polemic is something like a commitment to the truth of damage beyond its reconciliation into a healthy body politic; the question that concerns Goode is the following: “how do you enact fidelity to a wound, once the possibility of preventing it has been lost?” He goes on:

“In other words, the wound may be an instance of failure in the body system, but it is also a local suspension in our failure to know each other within our social system. The body thus becomes the setting for a legible signal, but also its enemy; and for as long as the wound remains, a tension exists between the tendency of the body towards closure and the tendency of the open wound towards information-giving. There is then a civic aspect to this tension, and it is, I would want to suggest, the tension that I want to hold open, not (sadistically, torturously) the wound.”

Caravaggio, for Goode, represents such a “local suspension” in our failure to know, in this instance, the risen Christ; incredulity is itself, in Goode’s reading, a Christian synecdoche for that slew of negative affects that put us in touch with a self whose price of admission is temporarily slashed. In Caravaggio’s Thomas’s incredulity, not his scepticism or his faith restored, Goode sees the possibility of rendering in aesthetic experience the very distinction between you and me, not as a function of an historically organised set of divisions and alienations, but as “a civic aspect,” that is, a kind of trust mediated not by exchange per se (in which the value of the gift is always measured by the prospect of its loss) but by community itself. It is in this sense a properly communist aesthetic, because the being of one body is visible (is readable) as the condition of the other, not as its corollary or analogy.

To move off at a bit of a tangent, this brief contribution to today’s discussion offers the following claim: it was important to certain poets writing in the 2000s, and remains important to certain poets writing today, that they cut themselves so that other people can poke around inside them. I mean this sentence to absolutely collapse the distinction between pain expressed in poetry, and the pain of the poet, because it is essential to a poetics of wounding as I understand it that no false pretences be made about some airy sphere of language distinct from the hands that write it and the mouths that speak it. Properly wounded and wounding language, language which refuses the salvific functions of lyric harmony, is one of the defining features of the current avant-garde, and is often misread as a kind of heroic martyrdom: look at the poet bleed, they must value their own blood highly. But it seems at least worth considering what kind of violence is done to what Goode calls the “civic” commitment of wounded language when we assume either that the poet is attempting some kind of personal catharsis, or that they merely represent kinds of suffering for the edification or the activism of others.

Goode’s reading of Caravaggio suggests to me another way to think about poetry that is full of open wounds, poetry that is designed to hurt. And that is to think about it as serving a “civic” function such as the one Goode alludes to in his conversation with Ladkin. In many ways this term “civic” is the unexplored term in the exchange: it is not at all clear what it means, and it even seems likely that Goode himself is unclear as to its meaning in the context he creates. In any case, “local suspension[s] in our failure to know each other within our social system” happen all the time; perhaps they are happening right now. But criticism needs to insist on these encounters as suspensions in failure so that the wound has a chance not to heal, and the body to be more like itself.

And in that spirit, here are some recklessly polemical suggestions for further thinking:

1. Only poetry that hurts, and stays hurting, is capable of making us feel restlessly available to one another as that which we need to be alive.

2. Poetry that wounds only to heal, or to gesture towards a recuperative synthesis of body and social body without keeping alive the specific kind of “tension” that Goode describes – that between the tendency to bleed and the tendency to forget – might as well be pop music. That would be fine.

3. Poetry that ruthlessly and torturously wounds itself in an endless display of linguistic gore, and which tips into misery without the straining of lament or dirge, is despair without incredulity, and is therefore useless.

4. It is important that criticism preserve something of the incredulity of St Thomas as I read it above – as the productive tension that elucidates the negative image of a fully-fleshed out encounter – by closely reading poems without plastering over them a theoretical account of social relations which the poem is supposed to exemplify. 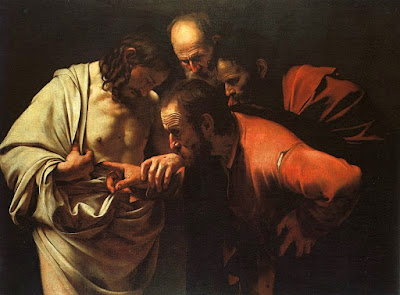