The Gnostic Cartography of Desire: aphorisms on Olson


What I come down to is that Maximus is the poetics of temporality, laid bare. I think finally that’s how the poem ACTS, and I think only, or at least certainly by, insisting upon temporality as the primary figure of the poems in particular, can all the booming, phallocentric, thetic rhetoric of the essays be put to good use. But finally, because I always want to skip, to go straight for the jugular with Olson, can there truly be a poetics of temporality, or is such a thing only ever destined to merely describe the passage of time, as Ashbery ends up so pathetically, whimsically doing? But to go back to jumping the gun – I think it’s a real danger in reading Olson, and a fear which seems to have been born out in the whole style of the recent film Polis is This, that if you take any single one of Olson’s theoretical touchstones from Projective Verse, Human Universe, Against Wisdom as Such, or wherever, and you apply it wholeheartedly, and you look at Maximus through that one lens, you end up with just that, the end of the picture you wanted to start with, and that’s when the project segues, not without struggle, but segues relentlessly into a kind of corny mysticism. Olson is not mystic, not in the way, say, Duncan was. He got his theory of myth and muthos from Harrison, and he stuck with that actionable language, as was passed onto Ed Dorn, who has a whole other folk ontology going on. But what still bothers me is the way in. Perhaps this has come about simply because of the historical weight P.V. bears, and that Olson seems only ever to be read as living up to his constructs (which in any case are filled with wild humour, puns, the kinds of twists he practices in the verse). The essays and the poems seem to me to be both purely textual, that he was constantly practicing praxis, and that nothing else would ever do – his letters too, especially to Creeley and Bolderoff.

The hugeness of Olson – that the poetry does deal with the “primitive” (as he had it) condition, the prime conditioning, in the case of the “pejorocracy”, of man, philosophical, economic. But even these categories aren’t somehow sufficient. It’s not that they’re not wide enough, but that to describe the primary writing of Maximus as layered in philosophical, mythical (which is emphatically not mystic, because it obeys rules of perception and history), economic, personal, geographical, I mean, these things are there, but they’re not there for the sake of being aspects of the text. The text does these things, that we can call philosophical, or economic – or it should do, and it doesn’t, not all the time. There is the sense, whenever I approach Olson from anything more than a distanced, tuned imbibing (which in any case always flicks me onto a sharper rumination) of: where to start, how to get to grips with the enormity of these instances of cognitive, etc, perception that are laid out before us. And I think it important to recognize that to a large extent, the poetry itself enacts this same process of finding, exploring, receiving, is itself the taking stock of its own procedure, which is not to say it is purely auto-enacting – cf. Stephen Thompson’s excellent and articulate essay in the Ladkin/Purves Edinburgh Review 14 on American Poetry – and therefore un-usable, but precisely to pinpoint the actual condition of form AS content that so pre-occupied Olson.

The complex simplicity of the Maximus project is that this is process as pedagogy – that the alienation of man/being/breath/muthologos, that for Olson are all part of the same historical schema, the pejorocracy & logocentricism – must be rectified by a poetics of temporality that puts man squarely in the driving seat. Gloucester is not microcosm, but simultaneously micro & macro – “life spills out”, every instance in Maximus is an image of the whole, transcending (but grounding) the lyric condition. It is an instruction manual of how to get out of onself and one’s debilitating culture – by appropriating history as what one does & says – and it is precisely this removal of the pejorocracy, this insistence on distancing oneself from it, which we can probably assert is the point at which Prynne, around 1970, begins to believe that such a project is too top-heavy, that the important thing to do is it collide with the pejorocracy head-on, to no longer avoid it in favour of an appeal to the Polis, which was never quite as dialectical as Thompson almost reads it, in Letter 6. 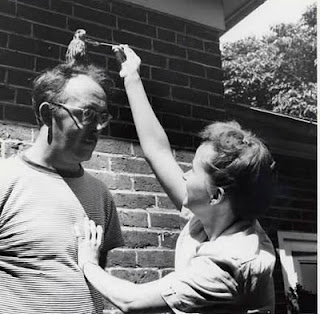 “For Olson, reality is the missionary position.” – Tomas Weber

The gnostic cartography of desire is: LIFE – which wants to abstract itself out // AND // my LIFE – which wants the particular to stand in for the whole, but stays particular. This is the lyric thrust that Prynne talks about in that most beautiful piece of friendship disguised as pedagogy, his address to the folks at Simon Fraser University in 1971. That lecture is, I know, hugely important to many people writing excellent and worthwhile poetry today, and I think perhaps more so than Maximus IV, V, VI is, or will be. But the image of desire that Prynne traces in that essay is, I think, couched in the temporal hi-jinks of Maximus as text, not as abstractable conceit, or any discourse of historical seismic shift in the space of post-modern American poetry, which I’ve no doubt Olson would have dismissed with some sort of misogynistic disparagement of the progenitors of discourse in general.

“that we act somewhere / at least by seizure, that the objective (example Thucidides, or / the latest finest tape-recorder, or any form or record on the spot / - live television or what – is a lie / as against what we know went on, the dream : the dream being / self-action with Whitehead’s important corollary: that no event / is not penetrated, in intersection or collision with, an eternal / event

Which is Maximus finding them out, not on the spot, but through the course of the epic. Now this passage throws up any number of concerns, not least the phallocentric cosmic boner of the reading of Whitehead, and of course mythic genealogical penetration is everywhere in Maximus, and also that “self-action” is dangerously un-coupled from Polis, so that here it is assumed that if everyone had the Polis in their eyes, then Polis is this, that segues uncomfortably into tautology, unless we keep reading, unless we keep wanting it, which is the poem’s real beauty. That it only makes sense in the actual act of reading it is both Maximus’ supreme achievement and also its galactic faceplant. It’s no good making language ACTUAL if it only appears actual when you’re reading it? (I get a similar feeling from some of The White Stones, another whole schooner of fish, right, but just the hell of it). But then how else might a poetics make sense, how else can life spill out of a poem? How else but by the spillage from percept to example, by how you take literature to act in the space of LIFE. That is, if you define them separately as such. Because if you stick with it, Maximus nearly actually becomes LIFE, it’s grandiose colonial projections unstick because the condition of colonialism is to subjugate and condense, to temper the environment and to make it micro, whereas Olson is continually opening it all up, including himself, especially including himself. It is the most generous un-auto-biographical use of biography, because, Letter 27 [withheld], he does propose a dialectical relationship between the lived experience of a personal history, the eternal event crossing him like a secant, and the instances of time that budge a life into itself continually to form the ever-present tense within which Maximus operates, nudging it forward, “than that which is, / call it a nest, around the head of, call it / the next second / than that which you / can do!”.

This is the sense in which, for me, Maximus is not like life, is too particular to be anything so grossly universalized as “like life” – “I am a ward / and precinct / man myself and hate / universalization, believe / it only feeds into a class of deteriorated / personal lives anyway, given them / what they can buy, a cheap / belief” – but rather, as the 3rd Letter on Georges has it, “makes it with me, and I want that sense / here, of this fellow going home”, but as I compare my feelings, or write my feelings on this poem by putting a line in my mouth from a unwritten poem, from the “sense” that Olson could not write himself, of this fisherman, “of this fellow going home” that he was not, I seem to trip across the whole metonymic twist of the poems and get lost. If the best I can do (which it isn’t, in any case, but let’s investigate this for now) is allow my appreciation of the poem to rest in a sentiment that Olson wanted to express himself but could not, is that the most personal commitment to home as the condition that any one of us has access to, on Earth, or is that too much like Battleship Earth? “I want that sense / here, of this fellow going home”. Desire and deitics headbutt as Olson demands that we make it with him – I want that sense too, but “here”, slammed across the enjambment’s wet deck, is already out of the picture, is already moving off out of our reach, and we have to keep running the course of the want itself to get there, as the cadence does not slow but similarly slams into the italicised square bracket, making us instanter stop still wanting. Not much more good may now come of this tonight, but hopefully this’ll run on further. This is still the best tattoo ever: