Mention country second point command help one swerve gallant into prosody, on second thoughts pursue this hetero-limb back to basics yeah thanks for that. X has said nothing like that. Where unskilled workers ratchet up to fire love so stupidly, it is a bit like

Sitting in the best internet cafe in the world.

That theme song from Dawson's Creek is ringing out over the bass-heavy speakers, eliciting just the right balance of lonesome proxy nostalgia and practical revulsion to keep me going through this letter. I mean, Solo is always Solo, and we just seem to collide in the nicest possible way, with the added paranoia over leaking rooms and typhoid-ridden towels. I'm staying in the same room I lived in for a year, and pretty much staying put in this town, and doing the things I used to do when I lived here - sleep a lot, eat a lot of rice, listen to and play gamelan, hang out with friends, buy my ticket out. It's a strange sort of dialectical relationship whereby I'm constantly glad of the fact that I will be leaving, which reflexively makes my time here even more precious. I'm reading Adorno in a mosquito net (I mean generally, not right now), going to the Mankunegaran Court Palace to practice gamelan whilst the rains smash the ground around us, hanging out with my neighbours' kids, watching Yojimbo round a friend's house whilst fending off the mosquitoes. It's a life I both crave and crave to dissect from afar, conceptually proximal but physically remote, I get here and I feel completely gluey on the inside, malleable, re-workable. That fluidity of purpose and self is massively important to cultivate, as I try to, but without any pride in doing so - I also seem to be exactly where I was with the language when I left, which has made re-unions all the more palatable. I'm not really saying what I want to say. Which is strange, because here that's all you have to do, and it works. I mean, there are codes, like anywhere, there are behavioral codes and dress codes and holding hands codes, but once you have these you know how to bend and break them, and getting on in the world is as easy as ordering a taxi in a foreign language in a city you don't yet know very well because you get taxis everywhere. Ease is not a component I trust - it emphatically isn't easy to live here, but the day-to-day transactions require a modicum of love and surface-feature interiority (which the dictionary wants to "correct" to inferiority, which isn't a bad pun) that bring certain selves to the surface almost without any actual volition. I find myself deep in conversation with one of my friends about the nature of what I can say in their language, and how that defines my capacity for truth.

It is also, in many ways, a very funny place. I have never laughed harder in my life than with David, here attending the same university I went to, but what we laugh about is couched in such particular experience the transfer of the joke is always at our expense - we effectively laugh at ourselves laughing, which I suppose could get dangerously solipsistic, but that I think is the necessary corollary to being so constantly outwardly exposed, at least superficially. I still find the music pathologically beautiful, and yet last night at the court palace practice, round the back, on the old gamelan, where it leaks and the foreigners and kids practice, I wasn't struck with the same magical charm I used to be - or maybe I was and I just took it for granted because I was concentrating on playing so much. Like the music, life here consists in expansion and contraction, tightening up and widening out, speeding in and rolling away. I found a dead wall-lizard in my toilet this morning.

The sound-world here is like nothing else - at any given point in the city the melange of characteristic sounds is remarkable. From my bed I get the panoramic call to prayer from 10 different mosques, some using ancient cassette tapes on maximum gain, the sound of the gamelan cassette from downstairs with Marseno singing along, doors slamming from the building behind my bed, and the occasional train horn from across town. Pop up to the roof of the outhouse and the sound of the mosques beaming out the Word is a totally different beast. I feel composed here as nowhere else. Passively, made-up, created, re-created, but also with dignity some way off the map, present but hardly that important.

But what better role for anyone to aspire to than hero? Hang on, hang on. Real life is like a photo but it moves, all 3% and climbing.

Tonight there's a latihan at Pak Panggah's house in Benawa. The old village dudes that practice there are some of the best people in the world, and I love them. My teachers from last year will also be there, see below for Pak Kamso and Pak Pardi, plus some londo. Budget capitalism is cuter / the image of the advertisement on the surface of the advert / capital as a diluted reflection of itself / disparity of the Jakarta-set soap operas where literally everyone lives in a huge clean house and is even whiter than me. 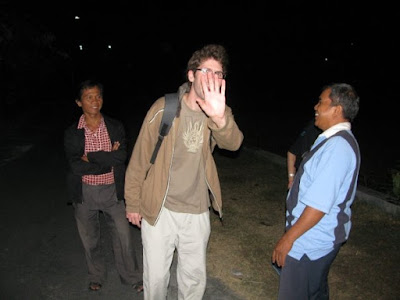