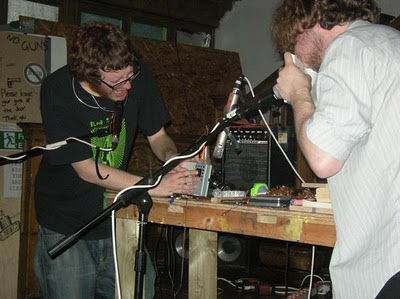 I've been plugging the Edinburgh-based improvisers Usurper (above) to anyone who'll listen for a few years now, and continue to do so in a piece that should be up on Foxy Digitalis in the next few days. In it I propose, roughly, that Usurper are like, Adorno, but like, not. I can't believe The Wire haven't offered me a job yet. In other Foxy D news an interesting and pertinent review of a new Sublime Frequencies release has been posted by Jan-Arne Sohns, who argues that Bishop and Gergis's latest shows worrying signs of an extremely counter-productive fetishism and de-historicising of the material at hand, as a result of which what is on one level an undeniably noble program tends to segue, however unwittingly, into a culturally dubious proxy-nostalgia that offers archive Asian pop music a chance to escape its obscurity only by being streamlined through a bastardised commodity-fetish presentation of its own outlandish otherness. Now, this won't be news to a lot of people, and the debate over SF's ethical water-tightness has been bubbling away for years and usually surfaces in interviews in the form of a question about royalties and the suchlike, to which the answers are for the most part perfectly reasonable - when SF is able to pay a living artist it does, although as a great deal of their catalogue represents archive compilations this to me isn't the most pertinent question concerning their methodology. Alan Bishop is an intelligent man and will deliberately fly in the face of perceived criticism of the label on any kind of anthropological grounds, often deliberately imitating a kind of gaudy post-imperialist sarcasm and making sweeping statements about the "system" and the "industry" which leads only to an opaque and seemingly ill-conceived notion of how SF fits into the "industry" picture. But these kind of statements are a part of the structures which SF uses to reflect its position with regard to what Bishop has termed the "academically catalogued/corporately funded "we've done all the work so stay home and shutup" elitist ethno-agenda", and more to the point (because no-one's trying to defend Songlines or Tower Records) the design and manufacture of the records displays the hand of the compiler in such a way that, in the words of Marcus Boon:

more than being eclecticism for its own sake, these "foreign" intrusions mark the presence of the editors, their own tastes and idiosyncrasies, the subjective nature of their choices. They also mark "the foreign" or "the intrusive" as something that is already being negotiated and appropriated through montage as a source of power and pleasure in these places...

These "intrusions" also take the form of absence, in the often stark and limited manner in which SF packages its CDs, something that Sohns takes particular offence to in his review of the latest Thai Pop Spectacular. This, too, can be recovered into the socio-political remit of the label in terms of a refutation of the kind of "elitist ethno-agenda" Bishop mentions in the Foxy interview - by serving up little aperitifs of text in the accompanying packaging, you reduce the need of the listener to actually find out where this music is coming from, what it's doing, when and why. After all, what is "fifty words of wall text next to a sweet ceremonial mask or hitting Wikipedia to explain jihad" if not base and misleading scholarly nonsense that would be condescending to all involved? The point is that for all the SF team's excellent and productive discussion of travel as the means of furthering one's cultural horizons instead of constantly searching for the traces of one's own, and the obvious encouragement for people who buy their records to search the stuff out for themselves, visit cassette shops and junk markets and find the musicians, the material itself suffers from a dearth of historical and social contextual information because this would be at odds with the aesthetic aura that defines the label's output.

The world of social anthropology has come a long way since Malinowski, and I think it safe to say that appeasing the likes of Sohns in terms of a few more liners in the releases would not only be possible within the parameters of SF's political aesthetic but actually boost the credibility of their status as an outsider label operating as a cultural jammer, feeding the ignorant Western music industry music it was too lazy or too disinterested to appropriate for its own ends. It's also fair to assume, and Bishop has been explicit about this in at least one interview, that the places from which, say, the golden-age nuggets of South-East Asian pop culture come from aren't particularly interested in having them re-discovered, and that the image of nostalgia that is marketed in the CDs design and presentation is to a certain extent a substitute for researching the providence and cultural legacy of the music more rigorously. The attitude sometimes adopted seems to be very much in line with something Bishop says in a Believer interview from 2008, and which chimes with others I've read:

BLVR: Travelling as frequently as you do, I’m curious as to how many languages you speak.

AB: I don’t speak anything very well. The longer that you travel, you find out that you really don’t even need to speak the language to get around and get things done, to live in those places. If you’re somewhat resourceful and perceptive, you’re pretty much going to know what’s going on because human nature is human nature: they understand it, you understand it, and it works.

This strikes me as odd coming from someone who is obviously a champion and an advocate of the culturally mysterious, weird and wonderful as spanners to throw in the monocultural works - he also states that this willful ignorance is an active and positive force in the creation of the SF canon, as if, for example, Bishop is listening to a Thai pop song from "the 70s" and doesn't know what the lyrics mean,

I can read it into my own way of formulating what it means to me. For the same reason that the guy singing that Thai song may even listen to Western music, but he’s not going to know what’s going on with the Western music either. He doesn’t know the fine points. He doesn’t speak English. Let’s say that all the Thais are listening to all this Western pop music and they don’t understand what they’re saying either. But they love it because it’s doing the exact same thing to them as their songs do to me. That’s the similarity here. That’s what is much more interesting than knowing what the songs are about.

which is where I suppose we would fundamentally disagree about the nature of the universal experience Bishop espouses, even if it can even be posited with any validity that such experience is culturally exchangeable in the terms described. If the desire is to actually encounter otherness and embrace that encounter instead of appropriating and translating it then why prioritise "what it means to me" as the sole barometer of cultural legacy? Is this kind of ultra-subjectivity towards musical meaning the only valid and meaningful interpretation left of how musics themselves translate as experience or commodity? Or is Bishop's stance the appropriate response to the "ethno-elitism" that itself appropriates, designates meaning and then presents its findings to the world at large? Is it, indeed, a part of the guerrilla tactics which Bishop clearly sees as necessary for SF to use in order to remain differentiated from the industry and closer to the non-aesthetic of Thai or Indonesian bootleg CD stalls, at which discographical information is at best patchy and in most cases non-existent? If the latter is true, which is probably the case, then it remains a strange image of a non-existent aesthetic, propagating as style something that is, in a sense, poverty or loss. At any rate, it does not, to my mind, serve SF's wider agenda, especially in terms of realising something of the nature of the “exotic”, that its predilection for a dearth of historical-contextual information may serve to have its products consumed as blindly and as familiarly as any other product of the Western-oriented pop hegemony; and the fact that so much of the South-East Asian material in some way involves American or European influences as essential ingredients in order to concoct their original histories complicates instead of simplifying the picture.

It should not escape note that I own a number of SF releases, and believe the SF canon to be a brilliant, vibrant and important document of modern and archival sounds, and hope they continue releasing this stuff if only because you're not going to hear Blondie in Khmer Camouflage anywhere else. But I am wary, like Sohns, of consuming at face value what are often very historically and culturally complex documents from incredibly diverse cultural backgrounds whilst being told that we are all human and thus all musical meaning is somehow directly culturally symmetrical.
Posted by Joe Luna at 22:10